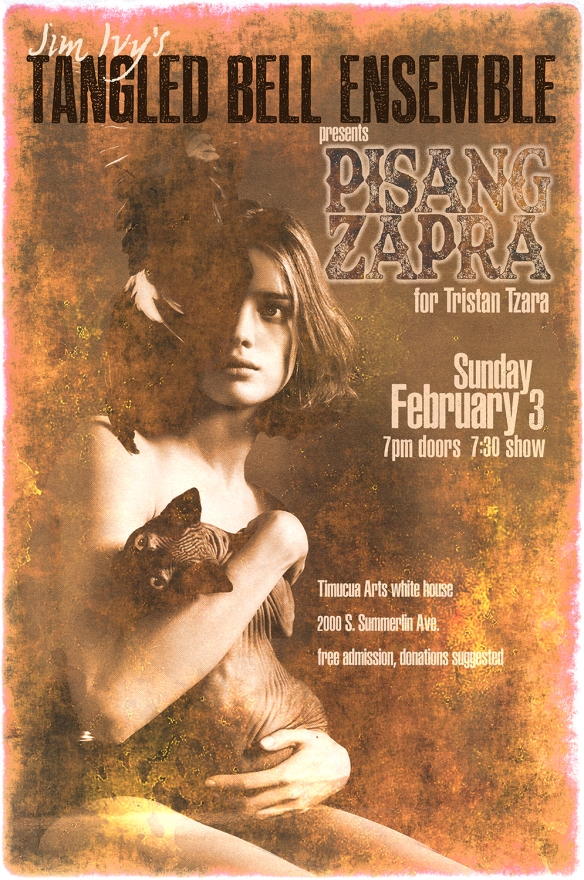 The main goal of this exploration is to juxtapose seemingly conflicting concepts and approaches, and display them in an aligning way; to show how antagonistic forces and unfamiliarity can create a cooperative friction and become formidable allies. The intent being that all portions of the whole (notated music, text, improvisation) were at once independent of and mutually dependent upon each other; symbiotic; each being a part and apart simultaneously.

By coordinating loosely written themes that rely on improvisation for story detail, the inclusion of musicians with vast differences in musical background and influence, semi-spontaneous arrangements and impromptu conducting, Pisang Zapra is presented as more of an experimental “state of the union” than a completed work.

Creating an environment where the construction of composition is immediate and experientially apparent has been an objective of mine for some time. The game piece, Milton Bradley (2012), attempted to coax improvisors into immediate composers by interpretation.

The Dada poetry of Tristan Tzara shows its influence in this piece of music in two ways. First, through the words themselves; poignant and clever, sharp and witty, dark and humorous, deconstructive and fluid, all at once. Getting to the point was not the end goal, but was part of the process.

Also influencing the music is the rhythm and phrasing of Tzara’s poetry; very musical but very non-Western and collage-like. As with most stream of consciousness writing and use of “cut-up” or random phrasing within a context, many times the gist of a paragraph or work will not present itself entirely until late or even at the end of the piece. The idea is not realized until completed.

Juxtaposition is used between the words of Tzara and my own personal “responses”, both in words and sound. This is meant not so much as a call and response, but rather like a conceptual “inside/outside” viewpoint of the same situation.

I am extremely honored to share this journey with the musicians here. Each of these performers brings vast knowledge from vary diverse spectrums of the musical universe.

All compositions written and arranged by myself with the exception of the final piece, written by Joseph Jarman, with my rearrangement.